Growing Up In The Wild Blue Yonder

Hubby and I grew up in very small towns (just a few hundred people) near each other. We come from a rural community where everyone knows each other and pillars of these townships go back for several generations. It was a very safe, wonderful, almost magical way to grow up.  We are incredibly grateful for the way we were raised and extremely proud to be from these communities.

We would have loved for our sons to grow up in the same type of experience...but that was not God's plan for our little family. Our boys grew up in a very different community than we did. They grew up in the Wild Blue Yonder of the Air Force.

Our Scientist and our Engineer are not Air Force Brats. I refuse to call them that. They are so much more than what that name implies. Yes, their blood does bleed red, white, and blue...yes, they know without a doubt what the "sound of freedom" actually sounds like...ahem...jet noise. As a matter of fact...because they grew up in the Air Force...they know what guarding freedom actually feels like as well.

Guarding freedom feels like fear that your daddy might not come back home...sadness when your dad isn't there to see you hit that home run or make that soccer goal....pride when you see someone salute your father...and heart-pounding excitement when you run into his arms on a tarmac after months of being apart.

There are people who have told me they feel bad for our sons because they had to grow up "that way". They wouldn't want it for their children. I understand that.

Sure it seems horrible that a father would miss a child's birthday, music recital, whole seasons of a sport, or every holiday at least once in their young lives. All of those things have happened to our boys. It wasn't fun. Yep...it was sad...but we survived it.

And truth be told...I believe our guys cherish the times we are all together even more because of the times we have had to be apart in the past.

Being an Air Force Kid actually has it perks. Our boys have enjoyed some amazing adventures growing up. Not all of them were directly related to their dad being in the military, but his occupation certainly added in some way to them getting to delight in many incredible childhood experiences.

So today...I'm Celebrating Our Air Force Adventure by sharing a little of the adventures of our Air Force Kids.

Our Scientist and Engineer have visited twenty-five states in this great nation...and have actually lived in six of them
They have viewed Mount Rushmore...the wide open spaces of Wyoming...and the Great Salt Plains in Utah.  They have driven over the Rocky Mountains and through the redwoods in swam in the gazed out over the touched the Mighty Mississippi...and cruised the Caribbean.

Our Scientist and Engineer have hugged Mickey Mouse at both and Disney World...toured Southern mansions in floated down the River Walk in both  City. They have visited science museums in several states...traveled by train to the top of Colorado's  from the top of the Gateway Arch.


Because they are Air Force Kids, they have met NASA Astronauts, Air Force Test Pilots, and at least one Tuskegee Airman. They have happily sat in the cockpit of a T-38 Talon training jet,  E-3 AWACS, and the U-2 Dragonlady. They even caught a ride to in the back of a USAF C-141 aircraft and visited
cruised down an Air Force runway going over 100 mph in a chase car behind a U-2 "Spyplane" being flown by their very own dad. They have flown Air Force simulators and relished several "behind the scenes" military base tours with their father.

Our Scientist and Engineer have dined with Generals...shook the hands of Veterans...and stood with their hands over their hearts as the National Anthem played over the base speaker signaling the end of the workday.

Both of our boys have walked onto a college campus not knowing a soul...made friends quickly...good ones...each earning a scholarship. 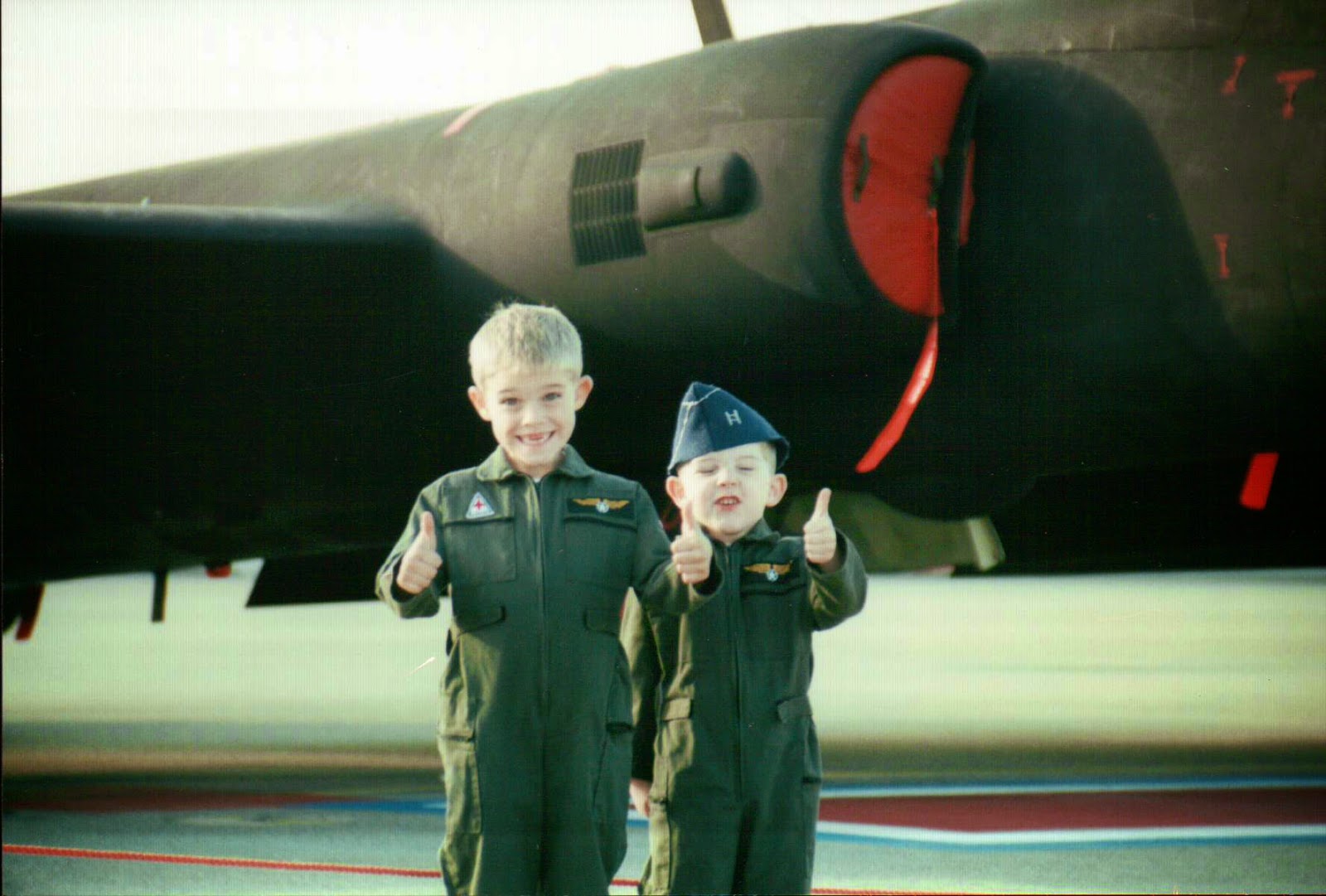 And they have done all of this before the ages 18 and 22.

So please don't feel sorry for our boys. They may have grown up differently than you or I...but their life in the Wild Blue Yonder of the Air Force has been filled with many wonderful, exciting opportunities which they have embraced and enjoyed.

It hasn't always been easy...but our sons are proud to be Air Force Kids...and Hubby and I are so very proud of them.

Here's your chance to say something!

Where I Place My Hope

A Little Bit About Me

Posts from the Past

Have courage, for the Eternal is all that I will need. My soul boasts, “Hope in God; just wait.” ~Lamentations 3:24:

You direct me on the path that leads to a beautiful life. As I walk with You, the pleasures are never-ending, and I know true joy and contentment. ~ Psalm 16:11

Create in me a pure heart, O God, and renew a steadfast spirit within me. ~Psalm 51:10

"For I know the plans I have for you,” declares the Lord, “plans to prosper you and not to harm you, plans to give you hope and a future. Then you will call on me and come and pray to me, and I will listen to you. You will seek me and find me when you seek me with all your heart. I will be found by you,” declares the Lord. ~Jeremiah 29:11-14a